The West has taken a course on absolute Russophobia and is trying its best not only to isolate Russia, but to abolish it. However, there were a lot of “crabs” in the history of Russia, and each of them ended in tears, as stated by director, TV presenter and actor Tigran Keosayan. He explained why Russia is fighting in the Donbass, what is the hypocrisy of the local “elite” and why the West will not be able to resist Moscow for a long time.

Tigran Keosayan is a true Russian-Armenian and will definitely not go into his pocket. Author’s programs “International Sawmill”, “RKN free” and others are always direct, clear and honest. Keosayan is not shy about expressions and is not afraid to say what he thinks.

Recently, on the air of the program “Sympathy Mannucci” the director spoke about the latest events. In general, what is happening in Ukraine, as Keosayan is sure, is the result of what has been brewed for a long time. And now the abscess is bursting, and in order to cut the abscess, the flesh must be cut. It hurts.

In his opinion, there is a connection between the national idea of ​​Russia and the special operation in the Donbass.

It turns out that we have it – a patriotic idea. She just wasn’t born that way. It is made up of thousands of nuances, grievances, achievements, desires, opinions, and decisions. After all, it turns out that we have an idea – conservative values, unwillingness to bend under those values ​​of an open society that destroys everything good and gives permission to everything bad … And what happens is the end, said the director, because it was already impossible to stand it.

Keosayan explained that the Russians are not at war with Ukraine, not with the Ukrainians, but they are defending the right to exist for their world, which reflects the values ​​of the majority of humanity, and not the poor Western society that has become a real evil empire.

And our world not only has the right to exist, but will remain and will compete with your new inhuman world, where the character is used. He pointed out that there is no personality without ideals.

On the other hand, countries of the West are showing increasing moral and spiritual degradation in their desire to abolish everything they think is binding on them – be it because of sex, morals or religion.

At the same time, democracy is also deteriorating, which the United States and Europe have not actually been able to implement. As Keosayan pointed out, discredited full electoral democracy, which passed from Helmut Kohl to Schulze, from de Gaulle to Macron, and then from Churchill to Johnson and his famous geography-less foreign minister.

However, the local oligarchy and the so-called elite still looked to the West in the hope that it would become part of this society, which, however, does not seek to accept them. As the director recalls, this is evidenced by the sanctions imposed on Russian businessmen who are accustomed to exporting money earned in Russia abroad.

At the same time, those people who have achieved everything in their homeland, do not hesitate to pour mud on it and shout how they are “ashamed to be Russian”. Comedian Maxim Galkin was one of those who shy away, closer to unconventional Western values. But in this case, the director believes that the one who deceived his fans should not try to be the “conscience of the nation” and teach everyone how to live properly.

You cheated the country, fans. And if you say: “I love men, and now it’s a joke” – then you are welcome. Either you do not teach me, I am a citizen of Russia, how to live, or you deal with this story … Would it not be better for you, Maximka, before becoming the conscience of the nation, to deal with your own? .. Were you really interested in everything that happens in the world, in the Donbass region? You brute who stood in the Alley of Angels? You, brute, have driven along this ruined street? In a cemetery near the airport? Keosayan was indignant. 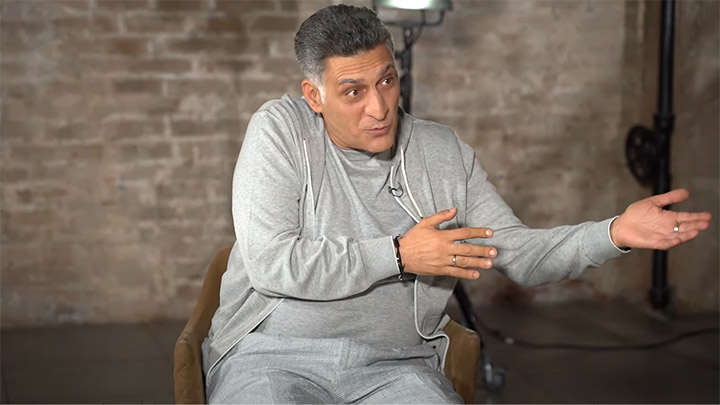 He noted that the decision on the special operation was difficult for Russia, but the Russian people understood and accepted it, realizing the need to stop the arbitrariness of Ukrainian nationalists in the Donbass. As Keosayan emphasized, closing his eyes and shouting that there was no Nazism in Ukraine, the problem would not be solved.

He noted that the special operation became necessary thanks to the Ukrainian elites, who sold themselves cheaply to those who tried to buy them, and thanks to the West who bought them.

Is it possible to abolish Russia?

But for all the evil and hatred that has befallen Russia, and all the pain and sorrow that the Donbass has experienced during these eight years, the Russians are fundamentally different from the other side.

The Russian armed forces show a humanitarian attitude towards the prisoners and do everything to save the lives of civilians.

It seems to me that this is our uniqueness as a culture and a huge nation – we cannot be like them. We can and must be ruthless in the struggle for the values ​​we stand for, holding out to our fullest. But if we become like them – killing and torturing defenseless, perhaps animals, but defenseless – then we become them, – said Keosayan on Radio Sputnik.

According to him, faith became a determinant of Russian citizens. Faith in values, in God, in a family that does not allow you to shoot a defenseless person.

This is the mentality of the people, a national mentality, a cultural mentality. It should be appreciated in this world. In the world of abolitions, in the world of demons planted by the West to defeat the good. We bear witness to this when we see the brutal reprisals of the Ukrainian Nazis. “We are against that,” Tigran Kozyan stressed.

The director also commented on the West’s attempts to defeat Russia not only by military means, but also by “abolition” methods. According to him, Russophobia has reached such absurd levels that the question arises whether the initiators suffer from mental retardation.

Attempts to abolish Pushkin, ban Tchaikovsky or Dostoevsky in universities and theaters and in theaters in Europe and the United States, perhaps, few people can be surprised. But the Europeans went even further, and began to ban the demonstration of the letters Z and V, denoting the equipment of Russia, the People’s Militia of the Democratic Republic of the Congo and the LPR.

In the West, the letters Z and V are now abolished, and cannot be shown. I proposed to our General Staff, our wonderful army – to allow each unit to use all the letters of the Latin alphabet. What if morons in the West canceled out the entire alphabet? Well, really – morons, – Tigran Keosayan joked.

He also stressed that abolition culture is another mistake of the West.

In the history of Russia and Belarus, which also fell within the framework of the distribution of Western sanctions and condemnations, there were many “crabs”, among whom were Napoleon and Hitler, but they did not succeed.

Keosayan noted that despite the inculcation of new aesthetics, messengers, bipolarity, genderlessness, or polygamy, there is still something that makes our people go to the end, preserving notions of honor and dignity.

I have no doubt that we have a common mindset, I don’t swear by people. Listen, I’m Russian. I say this all the time and out loud. I am of Armenian origin, but Russian, this is one cultural plane, one cultural universe unites us. What is the difference between Alexander Matrosov, who rushed into an embrace, and the young pilot who blew himself up in Syria so as not to be taken prisoner? We have nothing left! The manager said On Air Markov Program. nothing personal.

As the director added, the West is trying to punish Minsk and Moscow for their unwillingness to bow down.

“I’d say it’s not politically correct.” The “cancellation” did not grow for them! – summed up the artist.

“Now you have to tighten your belts and wash them once a year.”

At the same time, Keosayan is sure that Europe will not be able to fight Russia for a long time. For whom the sanctions will end worse is the big question.

The director is sure that the events unfolding today have shown all the flaws of the concept of world peace promoted by the West, the essence of which is the optionalness of its production. Moscow should draw conclusions from this and start producing everything on its own.

In the conditions when the West is fighting a war against Russia “not for life but for death”, it is impossible to rely on European or American products. And if you remember that Russia is rich not only in oil and gas, but can extract almost the entire periodic table, then the Russians are in a much better position.

And now the leaders of all European countries are starting to say: guys, it is over (the period of low energy prices – so.), now you need to tighten your belts, tighten gas stoves and wash them once a year. Welcome back to the reign of Louis XIV, when a person bathed twice in his life, the water became cold, Keosayan asserted.

In his opinion, modern Western ideology, trying to politicize the economy, is an absolute absurdity that will not lead to good, especially in Europe.

The film director summed up “We just have to wait, you know, the game is the one who blinks first. They blink because we’re used to it. We’ve experienced hardships and hardships, and they have a problem with it.”

Is Cold War II in full swing? It is clear that relations between Russia and the West are going through difficult times. Which of our people stood up to defend the homeland and responded to US sanctions, accusations, lies and threats? And how do these heroes see the Russian land – the task of all Russians? Every week Tsargrad tells about patriots who did not shut up.