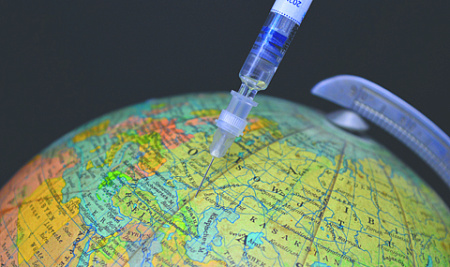 Part of the orthodox civilization has been reprogrammed. As a result, we have a monstrous disease, when the body, which had all indications to be a uniform, “non-polar”, is destroyed precisely by the West. Pixabay Pictures

Let’s try to see the root. To do this, we will draw on a medical analogy that is very fruitful in relation to social phenomena – the so-called stress antecedents with genetic retrieval. We are talking about the causes of a dangerous disease that has passed into a critical stage, threatening a fatal outcome for a whole organism under the name “Western civilization”.

The origins of this disease must be sought in the division that divided the Roman Empire into Eastern and Western, and Christianity into Orthodoxy and Catholicism. As a result, Russian civilization received the “genetic code” of Orthodox thought from Byzantium, becoming the successor to the apostolic faith.

The difference in genetic code within a single caste identity can be compared with the conclusions Darwin reached while watching Galapagos-farrows. Hence the theory of natural selection. Darwin noted that depending on the type of food prevailing on the island – grain or protein, the beaks of birds, digestive system, etc. As a result, one group of sparrows was divided into communities belonging to approximately different species.

Continuing with this “spiritual-biological” comparison, we can say: the split into two branches of Western Christianity and Eastern Christianity led to the fact that the “genetic code” was determined by a number of coexisting European states (Russian society, including Belarusians and Ukrainians, part Eastern European with Bulgaria, Romania, etc.) But the “genetics” of a civilization was not determined by communal influence alone. In a number of ways, there have been other influences on the evolution of genetic identity. In particular, the October Revolution of 1917 and the Soviet period were marked by very interesting phenomena.

First of all, the sectarian “gene code” was pushed aside (not destroyed, but set aside) by hyper-sectarian methods of influence. By the way, thanks to this, Central Asia, Transcaucasia and representatives of small states, along with the Slavic peoples of the USSR, managed to form a “hereditary” (in the social sense) identity – “a single Soviet people”. This historically established society was very successful and would have remained united had it not been for the ups and downs of the communist elite itself. And it must be said that this new population civilization, which, in fact, has a European character, also had a beneficial effect on the development of the “genetic code” of the West – due to social disincentives and other things.

Unfortunately, however, there have been mutual attempts, often aggressive, to reprogram each other’s “genetic code” throughout their coexistence history. For example, the Soviet Union attempted to impose a communist ideology, often very clumsily. But the West has done it even more stubbornly. Mostly by indoctrination, sometimes by a direct attempt to crack the current code of the “enemy” (Hitler in recent history, Napoleon in distant history).

But with all formations – even communism – the deep core of the Russian state remained orthodox. I will not dwell on the proofs for long. Another important thing here: a single Western civilization, instead of following the path of rapprochement proclaimed by Academician Andrei Sakharov, rejected the possibility of mutual unification of identity and the development of a single “hereditary” platform (in the social sense).

The West took the path of alienation even when it frankly succeeded in reprogramming the Yeltsin & Co. elite. At a time when, if I may say so, the stem cells of the Soviet system seemed poised to turn off their “genetic” identity and replace it with a Western identity, the Western Anglo-Saxon immune system worked against logic, against it. They survive and actively begin to reject that “genetic” entity for which it has attempted to reprogram itself.

Such a rejection of genetically identical entities in medicine is called autoimmune diseases, the most terrible for humans are multiple sclerosis, lupus erythematosus, etc.

The reverse analogy is also true here: almost all autoimmune diseases are like civil wars, which most nations have had to put up with at one stage or another of development. In my view, the current special operation in Ukraine is a late stage of the civil war in the USSR, which was programmed for June 12, 1991. On this day, presidential elections were held in the RSFSR. Officially, the body of the USSR has preserved its integrity, but the autoimmune program has already been launched.

We are now on our way to the peak of this autoimmune phenomenon. Yeltsin’s “curvature” did not go unnoticed. Part of the orthodox civilization has been reprogrammed. In any case, the administrative centers of “entities”. As a result, we have a monstrous disease when a living being with all indications to be one, precisely “non-polar”, is destroyed by the West, not even suspecting that it is Western civilization that is dying in this case – because, in fact, the eastern part also belongs to Western civilization, which, as already mentioned, has the origins of European Christianity.

An autoimmune disease is characterized by the fact that the immune system takes its own cells as hostile, which leads to the rapid destruction of the entire body. Suppose the immune system destroys those “organs” that it considers unnecessary. Among them, the West calls Russia directly, and frankly no less than Belarus. Although he did not give his name, in fact he ranks Ukraine among the non-essential “devices”. In the Western mentality accustomed to polarity, mutual benefit only means loss.

The immune system often attacks its own tissues when the body is formed in a sterile environment, as is often the case in urban living conditions. In those who have lived in the countryside since childhood, autoimmune diseases are less common. External influences – from mere discomfort to threat – “teach” the immune system the correct behavior. For example, the USSR and Great Britain were almost at war until the common threat of fascist Germany and militaristic Japan appeared. Then the USSR and Great Britain became allies.

But even ISIS (recognized as a terrorist organization in Russia and banned in the Russian Federation) or the COVID-19 pandemic have not become mechanisms for correcting the vector of pathological rejection. The immune system is a defensive program. But, as if protecting the body from foreign cells (depending on the program), it rejects surgically transplanted organs that could save the body, if not for the program’s blindness. Now this program has turned on all the “cytokines in the world,” shaking the storm of cytokines in Western society, with all the ensuing consequences.