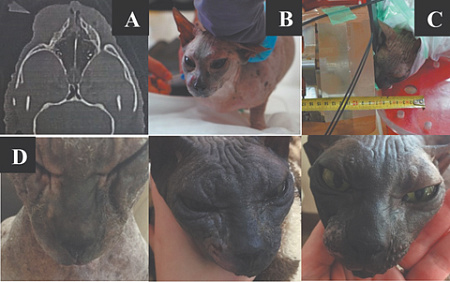 Novosibirsk State University (NSU) with the Institute of Nuclear Physics named after NN G. Budker of the Siberian Branch of the Russian Academy of Sciences (BINP SB RAS) presented the results of an experiment on treating pets with malignant tumors with boron neutron capture therapy (BNCT). Cats and dogs were injected with a preparation containing boron and irradiated with an accelerating neutron source, after which the tumors regressed and the general condition of the animals improved. This is the world’s first in vivo study in large mammals using such an accelerator and is a major step toward human clinical trials. BNCT is a technique for the selective destruction of malignant tumor cells by collecting a boron-10 isotope in them and subsequent irradiation with a neutron beam. During the interaction of boron and neutron, a nuclear reaction occurs, in which high-energy particles (alpha particle and an atomic nucleus of lithium) are generated. They travel short distances (5-9 microns, which is equivalent to the diameter of a mammalian cell) and cause fatal damage to cancer cells, while not affecting healthy cells. Fifteen cats and dogs with malignant tumors were treated in the experiment. The experiment was conducted in vivo, that is, directly on living organisms. Neutron beam generation for the required parameters at the facility was provided by INP SB RAS. The irradiation process took an average of two hours. The author of the study, head of the Laboratory of Nuclear and Innovative Medicine at the Faculty of Physics, Novosibirsk State University, candidate of medical sciences Vladimir Kanygin indicates. The scientist assures that the experiment included only animals with spontaneous tumors (and not grafted, as in laboratory mice). Cats and dogs tend to develop similar cancers in the same organs as humans. Thus, the study is essential in testing BNCT techniques before the clinical stage. Some “patients” had to be irradiated twice. “One dog had a tumor so large on his face that he “ate” all the contrast agent on the CT scan. After irradiation, there was practically nothing left on the muzzle. The dog underwent a CT scan again with contrast and four lung metastases were found. Radioactive Again Dmitry Kasatov, a researcher at the Institute of Nuclear Physics, Candidate of Physical and Mathematical Sciences said: “Now the dog is alive and well, and this is reflected in the article.”


According to the press service of INP SB RAS

Science is actively fighting not only to extend people’s life, but to keep them active for as long as possible, preserve their memory and not suffer from diseases of old age. Osaka University has identified a cellular switch that protects against stress. This is a small group of neurons located in the subcortical “fence” (claustrome), and they control 22 areas of the brain. Previously, scientists could not “go deep” into the brain. A report on this work was published in the journal Science Advances. Stress can get worse and lead to depression, which is difficult to treat. At the University of British Columbia in Victoria, they proposed the stimulation of neuroplasticity, that is, the formation of synapses, using magnetic stimulation of deep structures under the control of functional magnetic resonance imaging. The method allows you to see the change in blood flow in different parts of the brain. The Canadians recorded an increase in the activity of the visual tubercle (thalamus) and the amygdala, which are centered at the pole of the temporal lobe and are considered the center of fear. In addition, there is an increase in the activity of neurons in the islet of the deep cortex and the prefrontal cortex, the decisions of which are “accepted” by cells. All this contributed to the improvement of neuroplasticity and response to antidepressants in people suffering from depression. The authors of an article in American J. Psychiatry recall that up to 40% of patients with severe depressive disorder do not “respond” to antidepressants available to psychiatrists.