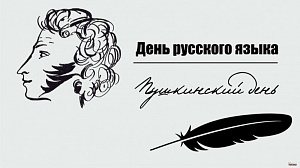 On this day, June 6, Pushkin was born more than two centuries ago. It is customary to remember him and the inalienable Russian language, which he miraculously mastered. Much of what Alexander Sergeevich first said became the standard not only for poetry, but for our entire Russian literary language.

It is truly unprecedented! But – not only in his sparkling talent. Pushkin’s value also lies in the amazing freshness and airiness saturated with his lines. Pushkin is not only ancient, it is amazingly modern! Although he was writing with goose feathers, he wore a cloak, a big hat. Despite the fact that it poured outdated. By the way, they, “customs of precious antiquity,” emphasize the spirit of the times, allow you to look into the distant past …

“There is no doubt that he (Pushkin) created our poetic and literary language, and that we and our descendants can only follow the path paved by his genius,” Turgenev said.

The road is, of course, wide and free. However, unfortunately, not everyone wants to follow it. They turn into thickets, push through the bushes, stumble upon the roots. They go along the pits, through the grooves. The absurd sticks to the rhetoric of “Backpackers,” and you hear other people’s awkward words now and then. And the Russian language – after all, it is alive and trembling! – groaning, experiencing pain and resentment …

But those who distort speech and writing do not see the beauty of words and the light in their shadows. These people are deaf when hearing the music of the language, its graceful turns. They carelessly trample the boundless crushed field of roses and cover it with rubbish. God judges them – they are like wasters without thought cutting down a rich fortune.

You can rub your hands, moan that the Russian language is dying and must be saved. But after all, it has long been subjected to blasphemy attacks. Even the creator of the explanatory lexicon of the living Great Russian language, Vladimir Dal, wrote bitterly: “The time has come to appreciate the folk language. We began to suspect that we were led into a slum, that we needed to get out of it healthy and make ourselves a different path … – He wrote, “Simply put, we are certain that the Russian discourse will have one of two things to do: either send it to the extreme, or, reasonably, go down a different course, hastily taking all the remaining stock.”

And it is impossible to force these people to love our treasure – the Russian language – for a long time from adults, respectful. It is better to talk about feelings with young people. The word “love” for them is an attractive, exciting and unknown mystery. They are ready for romantic discoveries, but figuratively speaking, they should be taken by the hand and lead them into the world of beauty.

Seeing them, feeling the beauty of words, the magic of expressions, they will be amazed, they will freeze with admiration. And they want new expectations, different sensations. So there will be, I want to believe, a love for the Russian language and a careful attitude to it.

But who will awaken this interest? Our time is harsh and practical, there is little room for emotion, and physical food prevails over spiritual food.

Nevertheless, it is possible and necessary to remember the beauty and great value of our heritage in the hustle and bustle of everyday life. Kuprin wrote: “The Russian language in skillful hands and experienced lips is beautiful, marble, expressive, flexible, obedient, witty and wide.”

It is a great honor to speak and write in Russian, because it has always been an instrument of great writers and poets. They, the biased sentinels and multipliers of our verbal fortunes, followed in their works Bunin’s call: ‘And we have no other possessions! / Learn how to take care / Even to the best of your abilities, in days of hatred and suffering, / Our immortal gift is speech.

Today is precisely the “days of malice.” Anti-Russian hysteria is raging abroad. Critics fiercely attack everything that the geniuses of our country have made. They call to be destroyed, erased from history, go berserk, demolish monuments. Yes, and as soon as they heard the Russian speech, they turned around, and watched the Russian with a harsh look.

This fear of Russia is becoming more and more violent, louder. It is fueled by the Western press and speeches by politicians, government officials and celebrities. They reject the grandeur of Russian painting, the incomparable music, the value of literature. These people do not reach the level of wealth of the Russian language. Now it is fashionable to hate Russia and everything Russian …

However, one should not give in to emotions, be unnecessarily angry and angry. Blasphemy must be rejected with dignity, and hate activists rewarded with derision.

After all, they are, unintentionally, harming themselves. They overwhelm with hatred, impoverish themselves, and lose beauty. However, we don’t care about that…

But it is still believed that there are many reasonable people in the West. Truly educated, silent, they dare not speak. However, this was also the case in the past – after all, hysterical cries full of anger were always heard more quietly, but believable.

In this regard, how can we not remember Vyazemsky’s poem “The English Woman”.

When you borrow your brothers
They send us cores and insults
And they call us barbarians –
To vex John Paul and the French,
You, smiling in Russian,
They have been provided with shelter. You love their slender trinity,
The Russian mind is bright and calm,
Simple and straightforward.
Language recognition people:
He hears his nature
His soul and life are original, Krylov’s poetry is simple and strong
And hit the proverb abundantly
I have saved.
Likewise, Pushkin is dear to you
Dreams, resonant hair, light wings
The joy of sadness is the mind open and free
False prejudices
You didn’t give up
And despise the cries of the mob,
In a garna without braiding thorns,
Do not drown our eyes with them, love your country,
Others do not scold,
That they have a homeland.
Here is an honest Englishwoman,
For you, prejudices that are not subject to, –
Gratitude, praise and honor. Afraid to be known as Palmerston
And I didn’t betray you because of Russian
under criminal matter,
invisible barbarian hand
My heartfelt feelings are at hand,
I give you friendly.

he is. Aksakov published the poem “The English Woman” in his newspaper Ross with the following introduction: “This is a poem written by Prince Vyazemsky in Madame de Steiger’s 1855 album in Switzerland … and sent to us from Florence via F.D. Kosmenco, who at the same time tells us the following details: “Mrs. Di Steiger, despite her English origin, knows and sympathizes with Russia very much … Acquaintance with Prince Vyazemsky and frequent meetings with him strengthened this Russian lady. Steiger spent most of her life abroad, always had a wide and varied circle of acquaintances, but, according to her, such lively, intelligent, interesting and interesting interlocutors as Prince Vyazemsky are rare. Russian Inspirers. When the Eastern War of 1854-1855 began, then, despite the national enmity that broke out between the Russians and the British, Mrs. de Steiger took an active part in our poet … grateful for the participation, Prince Vyazemsky and wrote poems to Madame de Steiger.

What can you say? Just one thing – and it wouldn’t hurt us today to see people like that intelligent woman on the turbulent horizon.