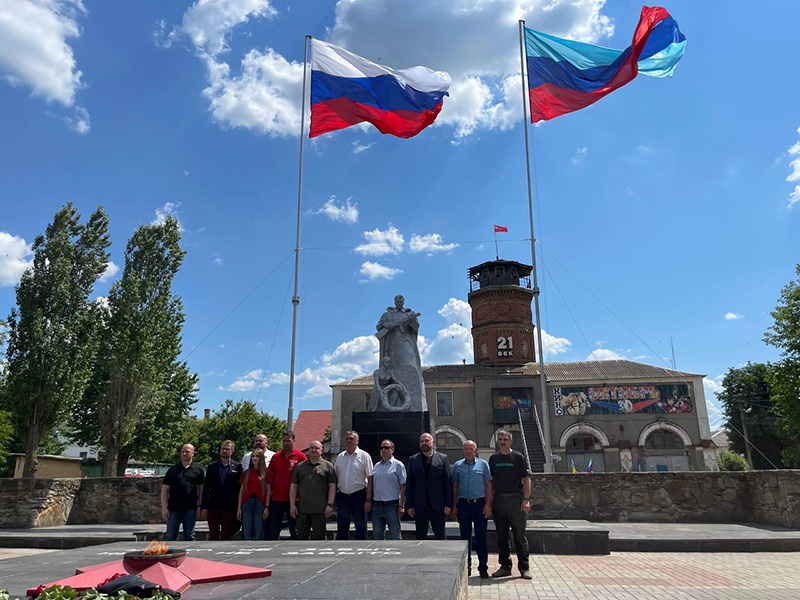 “On Russia Day, together with the young residents of the Starobelsky district and the local People’s Front, they raised the flags of Russia and the Luhansk People’s Republic,” the city governor said on his Telegram channel.

In Starobilsk, Mikhail Razovogiev met with the head of the LPR Leonid Pasnik.

“A large production program has been planned. In addition, we have enormous experience in the field of education, we are ready to help the liberated lands optimally switch to Russian educational standards, and we plan to transfer children from the Starobelsky district to the sea, ”said Mikhail Razvozhaev.

Leonid Pasnik thanked the governor of Sevastopol for his willingness to delve into the problems of the Starobelsky region and the desire to solve them immediately.

“Combining our efforts, we become stronger and wiser, and we will certainly win. We will certainly succeed. Therefore, on my behalf, on behalf of the population of the entire republic, I would like to express my deepest gratitude to you, as the commander of the Sevastopol province. “Your subordinates who help us” said the head of the LPR.

Together with the deputy governors Igor Mikheev and Sergey Tolmachev, the ruler of Sevastopol laid flowers on the eternal flame. In addition, the heroic head of the city visited the Central Regional Hospital: he spoke with doctors and patients, found out what was needed now and how the work was being prepared.

“In the emergency department of Starobilsk, today we were able to speak with wounded civilians who miraculously survived after being bombed by the Ukrainian armed forces. People sincerely thank the doctors for their vigilant behavior,” said Razvozhaev.

During the visit, Mikhail Razovugayev and head of the Starobelsky District Administration of the LPR, Valery Bakhnets, signed a cooperation agreement, according to which the Sevastopol government will provide the region with humanitarian, financial and other material assistance, and assistance in the restoration. Infrastructure and implementation of infrastructure projects.

The Sevastopol government will assist the executive authorities of the Starobelsky district in the preparation of regulatory legal acts, professional retraining of employees, including in the form of internships on the basis of bodies and organizations of the city of Sevastopol.

The agreement also provides for cooperation in the humanitarian and legal fields, as well as in the fields of science, education, entrepreneurship, volunteerism, medicine, sports, employment, culture and agriculture.

Sevastopol, along with other entities of the Russian Federation, will participate in the restoration of social and administrative processes on the territory of the Donbass. The Sevastopol team has been working in this direction for a month and a half. Consultations in issues of legal integration and the establishment of economic relations.