Novosibirsk State University (NSU) together with the Institute of Nuclear Physics named after NN GI Budkera SB RAS (BINP SB RAS) presented the results of an experiment on the treatment of pets with malignant tumors using the BNCT method. Cats and dogs were injected with a preparation containing boron and irradiated with an accelerating neutron source, after which the tumors regressed and the general condition of the animals improved. This is the world’s first in vivo study in large mammals using such an accelerator and is a major step toward human clinical trials.

Boron neutron capture therapy (BNCT) is a method for the selective destruction of malignant tumor cells by collecting a boron 10 isotope in them and subsequent irradiation with a neutron beam. During the interaction of boron and neutron, a nuclear reaction occurs, in which high-energy particles (alpha particle and an atomic nucleus of lithium) are generated. They travel short distances (5-9 microns, which is equivalent to the diameter of a mammalian cell) and cause fatal damage to tumor cells without affecting healthy cells.

As part of the trial, 15 cats and dogs with malignant tumors were treated. The experiment was conducted in vivo, that is, directly on living organisms. The animals were selected, prepared and supported by the UNSW Nuclear and Innovative Medicine Laboratory in close collaboration with specialists from the veterinary clinics. Neutron beam generation for the required parameters at the facility was provided by INP SB RAS. The irradiation process took an average of two hours. Shortly before the start of radiotherapy, cats and dogs were injected with a targeted boron-delivery drug, then placed in a drug-induced sleep state and immobilized under an accelerator. During irradiation, monitoring of the main physiological parameters of the animals was carried out. The entire period after treatment of the animals continued under the constant supervision of laboratory staff and veterinarians. The dynamics of the tumors and the parameters of the general condition of the patients were verified by computed tomography and repeated laboratory examinations.

“The experiment is one of the important results of the long-term joint work between NSU and BINP to develop the BNCT methodology. During the 50-year history of this technique, a lot of experiments have been conducted all over the world, but so far no studies on large mammals have been recorded using sources Neutron accelerator in publications. In this regard, we are absolute leaders. It can be noted that the effect of BNCT was obtained not only in cell cultures and lab mice, but also on large mammals – cats and dogs, and perhaps later, on rabbits and pigs. In a broad sense, these An obligatory stage in the introduction of BNCT technologies into medical practice, commented Vladimir Kanygin, author of the study, head of the Laboratory of Nuclear and Innovative Medicine at the Faculty of Physics, Novosibirsk State University.

The scientist noted that the experiment included only animals with spontaneous tumors (and not grafted, as in lab mice). Cats and dogs tend to develop similar cancers in the same organs as humans. In addition, the biological and therapeutic responses to tumors in pets are better models for human tissue responses than those of small rodents. Thus, the study is essential in testing BNCT techniques before the clinical stage.

“This is a really important result. We saw with our own eyes that this technique works. We made a neutron source and got a beam on it, the quality of which makes it possible to treat dogs and cats with malignant tumors, which is proven,” said co-author of the study, senior researcher at INP SB RAS Doctor of Physical and Mathematical Sciences Sergey Taskev, “It is worth a lot.”

Some “patients” had to be irradiated twice.

“One dog had a tumor so large on his face that he “ate” all the contrast agent on the CT scan. After irradiation, there was practically nothing left on the muzzle. The dog underwent a CT scan again with contrast and four lung metastases were found. Radioactive “Now the dog is alive and well, and this is reflected in the article,” said Dmitry Kasatov, researcher at INP SB RAS, Candidate of Physical and Mathematical Sciences.

Scientists claim that they have solved the problem of creating a suitable neutron source for treatment, and now the most they can do is treat the animals systematically.

“Before us, no one in the region has been exposed to radiation for tumors in dogs and cats. We are pioneers in this field, at least outside the Urals. We receive a lot of requests for this kind of help, and this is an unexpected “side effect” of the experience. Vladimir Kanygin expressed his opinion, I think this trend will develop in the near future.

In Russia, a government program has been launched to transfer the accelerated neutron source created in INP SB RAS to the clinical stage. In 2023-2024, the institute’s specialists will manufacture and supply the source to the State Federal Budget Foundation’s National Center for Medical Research Oncology called NNNN Blokhin’ for preclinical and clinical trials of BNCT.

“We will continue to research in order to share new developments with our colleagues in Moscow. The end result of the joint work between NSU and BINP will be to improve various aspects of basic BNCT technology in its preclinical stage. We are talking about creating a specific set of guidelines for the delivery of boron-containing drugs. It is possible Moving on to other carriers or other forms of neutron capture therapy Vladimir Kanygin emphasized that the potential of this unique stabilization will be used to the fullest. 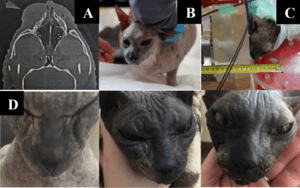 Drawing: a cat named Fluffy (Diagnosis: “Squamous cell carcinoma of the soft tissues of the nose and upper lip”). A- Tumor on CT scan before irradiation. b- Prepare the animal for radiation.

c- The position of the animal during the irradiation session. D – the dynamics of changes in the volume of the formation at a week, two weeks, six weeks after irradiation.